Ships and Science: The Birth of Naval Architecture in the Scientific Revolution, 1600-1800

Larrie D. Ferreiro Oct 18, 2021 Larrie D. Ferreiro
The first book to portray the birth of naval architecture as an integral part of the Scientific Revolution, examining its development and application across the major shipbuilding nations of Europe."Naval architecture was born in the mountains of Peru, in the mind of a French astronomer named Pierre Bouguer who never built a ship in his life." So writes Larrie Ferreiro at the beginning of this pioneering work on the science of naval architecture. Bouguer's monumental book Traité du navire (Treatise of the Ship) founded a discipline that defined not the rules for building a ship but the theories and tools to predict a ship's characteristics and performance before it was built. In Ships and Science, Ferreiro argues that the birth of naval architecture formed an integral part of the Scientific Revolution. Using Bouguer's work as a cornerstone, Ferreiro traces the intriguing and often unexpected development of this new discipline and describes its practical application to ship design in the seventeenth and eighteenth centuries. Drawing on previously untapped primary-source and archival information, he places the development of naval architecture in the contexts of science, navy, and society, across the major shipbuilding nations of Britain, France, Spain, the Netherlands, Sweden, Denmark, and Italy.Ferreiro describes the formulation of the three major elements of ship theory (the science of explaining the physical behavior of a ship): maneuvering and sail theory, ship resistance and hydrodynamics, and stability theory. He considers the era's influential books on naval architecture and describes the professionalization of ship constructors that is the true legacy of this period. Finally, looking from the viewpoints of both the constructor and the naval administrator, he explains why the development of ship theory was encouraged, financed, and used in naval shipbuilding. A generous selection of rarely seen archival images accompanies the text. 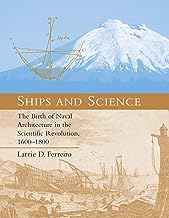 Book Title: Ships and Science: The Birth of Naval Architecture in the Scientific Revolution, 1600-1800